24th April, 2016: GOB Team visited Vienna for a private meeting with the president of the Austrian Society for Regenerative Medicine Dr. Georg Kobinia and his colleague Dr. Francisco Ruiz-Navarro. It was decided that they would be both joining our GOB for Life Scientific Board.

The main topic of the discussion was the implementation of the Magellan® Autologous Platelet Separator in Dr. Kobinia’s Medical Centers in Vienna, Cairo, St. Petersburg and Abu Dhabi.

Dr. Ruiz-Navarro will begin publishing papers for GOB for Life projects. There was also some discussion of the opportunity for GOB to become a Global Hub connecting all the scientific organizations. We will create projects in the field of Regenerative Medicine Therapies, and implement a mutual platform where everyone will have an access to the most innovative protocols and papers.

Dr. Kobinia is an Austrian surgeon who began his career at the Hospital of Lainz at the General Hospital in Vienna and later in Linz where he focused his area of expertise on thoracic and vascular surgery. He described the subcutaneous implant of the crural bypass as well as the implantation of endothelium cells to synthetic prostheses using fibrin glue, a method which has been implemented in various other hospitals.

During his stay as Fellow of the American Association for Thoracic Surgery at Massachusetts General Hospital at the University of Harvard, Boston, Dr. Kobinia wrote his professorial dissertation on the “influence of coronary artery obstruction on cardiac prostaglandin metabolism during surgically induced cardioplegia.” This fellowship is granted once a year to one surgeon worldwide.

After his return in 1986, Dr. Kobinia was nominated as the head of the new department of cardiac surgery at the Hospital Klagenfurt (today’s Klinikum Klagenfurt) and has been elected to the board of the department of cardiac and thoracic surgery. He achieved the specialization diploma for cardiac and thoracic surgery. Under Dr. Kobinia’s management there have been numerous clinical developments. Due to his experience gained in Boston, Dr. Kobinia arranged the electronic data entry for surgical and clinical areas. This fact was considered as a new application to Austrian medical institutions. The electronic data entry has brought a prospective way to different scopes of work such as electronic recording of the measured data of the heart-lung machine during cardiac surgery. Together with Warren Hancock, he developed a stentless aortic heart valve. The use of this heart valve was simplified using a new suture method with 3 sutures of the top of the commissures, a method which paved the way for the percutaneous insertion of aortic heart valves.

Dr. Kobinia continued his research in the field of the traumatic aortic rupture and its treatment via retrograde perfusion through the heart-lung machine. Furthermore, the successful execution of aortic arch surgeries in hypothermia and the initiation of a program for the resuscitation of frozen and drowned patients via heart-lung machine were begun. The result of this research work is the description of the successful resuscitation of a drowned child whose heart action has stopped for more than 45 minutes. This publication was listed under the top 10 publications worldwide. Dr. Kobinia engaged himself successfully for the use of video endoscopy as an early treatment method for pneumothorax.

Dr. Francisco Ruiz-Navarro (M.D) is Researcher from the Austrian Society for Regenerative Medicine in Vienna, Austria. Prior, he was part of a research team at the Mexican Institute for Neurology and Neurosurgery in the Cerebrovascular Department with research focused in multi-centric population studies with Hispanic stroke patients. He was research assistant in the Center for Research and Advanced Studies of the National Polytechnic institute (CINVESTAV) in Mexico City at the Brain Bank and the Physiology, Biology and Neuroscience Department studying the neurobiology of Alzheimer´s disease. He was Research Assistant in La Raza Medical Center in Mexico City in the pediatric nephrology department. He obtained his Medical Degree in Anahuac University in Mexico City and became USMLE board certified in United States of America with outstanding grades. During his career he has been attending physician in different Mexican hospitals in Mexico City as part of general medicine, anesthesiology, and neurosurgical teams. Also, he performed clinical rotations at Jackson Memorial Hospital Miami, USA in the stroke unit, neuroradiology and neurosurgery departments. His current research is directed to the use of stem cells for neurological diseases.

Any cookies that may not be particularly necessary for the website to function and is used specifically to collect user personal data via analytics, ads, other embedded contents are termed as non-necessary cookies. It is mandatory to procure user consent prior to running these cookies on your website.

The uniqueness of the Vivostat® system is a novel patented biotechnological process that enables reliable and reproducible preparation of autologous Fibrin Sealant or Platelet Rich Fibrin (PRF®) without using cryoprecipitation and without the need for a separate thrombin component. 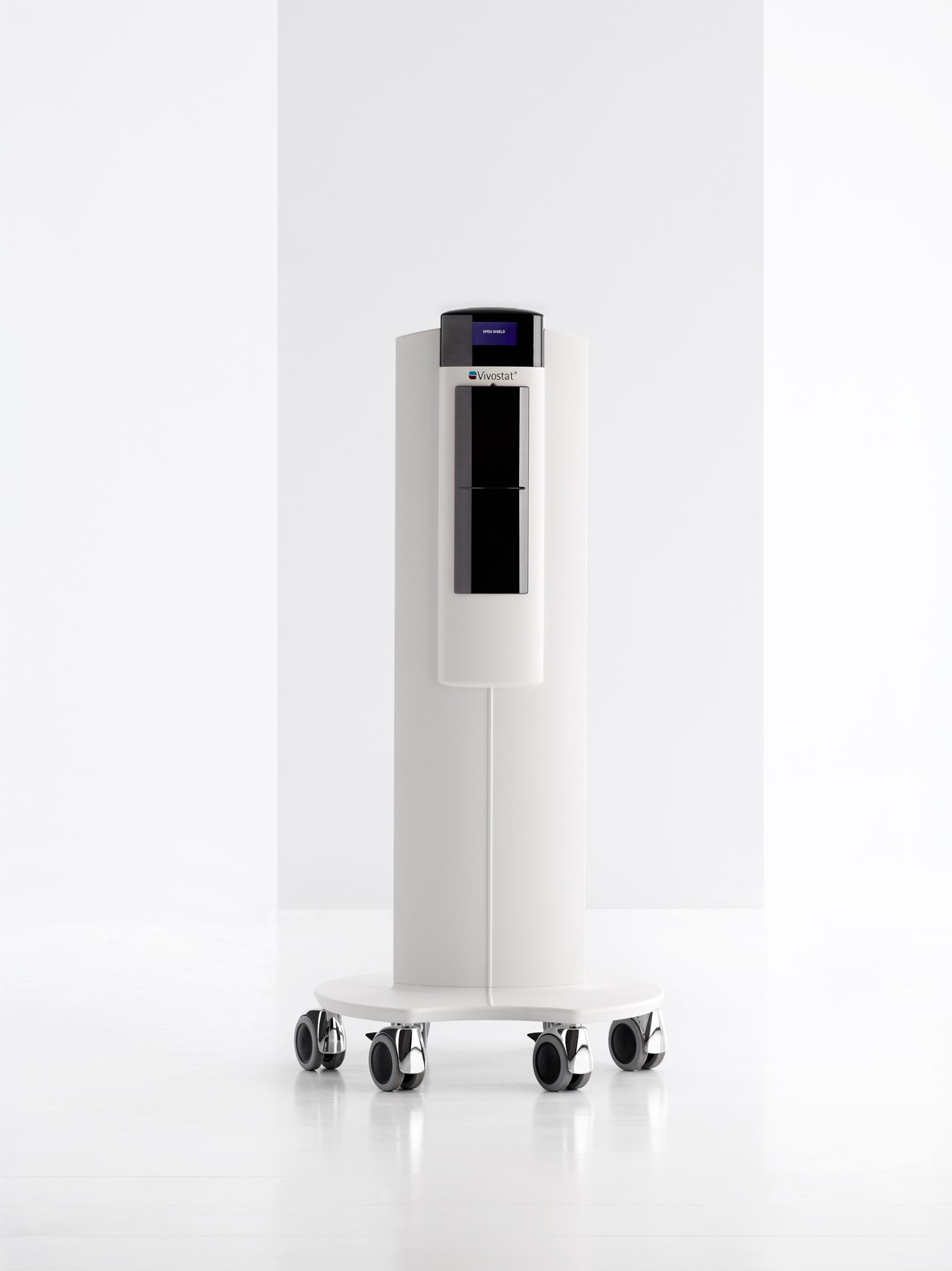 1Besides the Spraypen®, the Vivostat® system offers different types of applicators, e.g. the Endoscopic Applicator. For a full list of application devices click here

1. Draw blood from the Patient

At the time of surgery or up to 24 hours before1, citrate (supplied with the kit) is added to the Preparation Unit. 120 ml of the patient’s own blood is then drawn into the same unit.

The Preparation Unit is placed in the Processor Unit. At the touch of a button the process starts; after approx. 25 minutes, an autologous fibrin or PRF® solution is ready for use. No thrombin or bovine components are added to the blood at any time.

3. Load the Applicator Unit and spray

The Fibrin or PRF® solution is easily loaded into the Applicator Unit and applied to the surgical site using one of the unique application devices (e.g. the Spraypen). 1This depends on the type of kit being used. Always consult the “Instructions for Use” supplied with the kit to determine the correct preparation.

The following video illustrates how to prepare and apply autologous fibrin sealant.